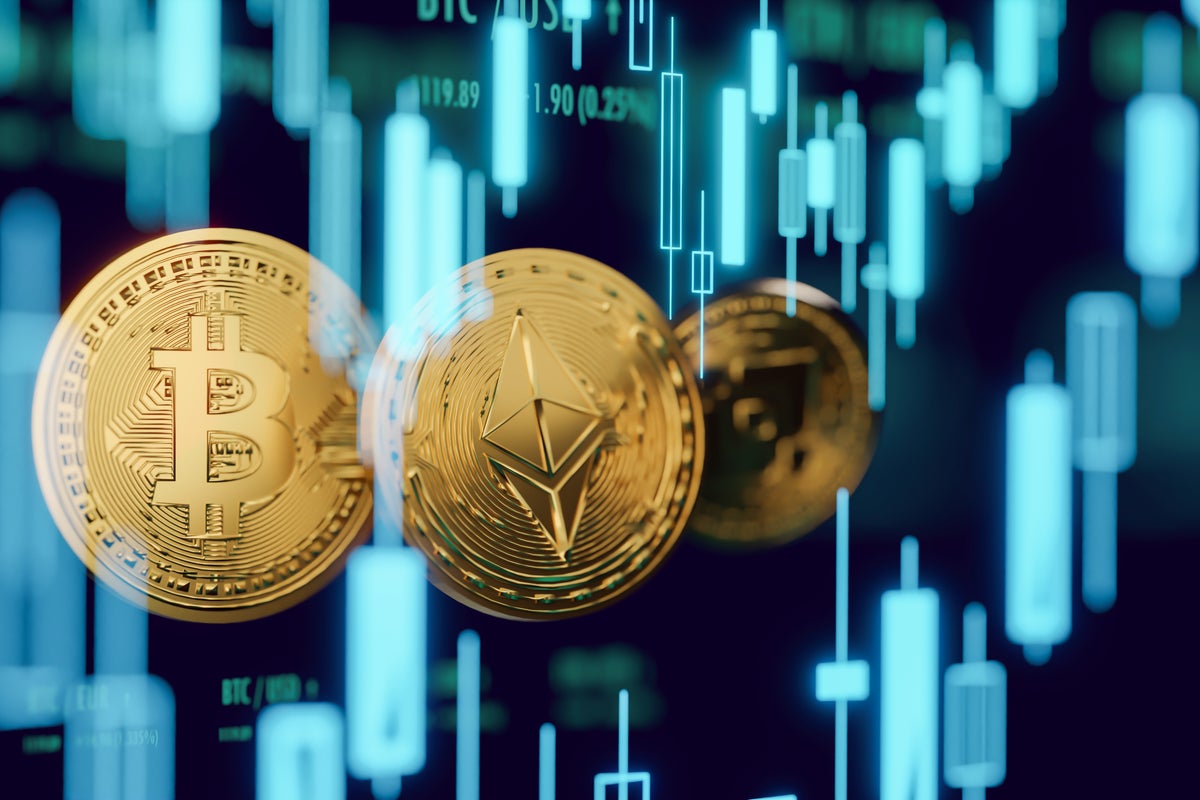 Major coins were in the green on Thursday evening as the global cryptocurrency market cap rose 0.7% to $1.04 trillion.

See Also: How To Get Free Crypto

Why It Matters: Ethereum was the frontrunner in terms of gains among major coins at press time. Cryptocurrencies were buoyant ahead of a key address by the U.S. Federal Reserve Chair Jerome Powell.

Ahead of Powell’s speech, stock futures were seen trading flat. However, for the day, the Nasdaq and S&P 500 rose 1.4% and 1.7%, respectively, as reports emerged that the United States and China are nearing a deal that would allow for audit inspections of New York-listed Chinese companies.

OANDA senior market analyst Edward Moya pointed to a fall in jobless claims and a slight revision higher with both headline GDP and personal consumption data to say it was a “perfect appetizer” for Friday’s hawkish Powell speech.

“The Fed is ready to be locked in tightening mode until inflation eases and the latest inflation pretty much confirms that won’t happen until next year. The labor market is still too strong and that will continue to feed into rising wages and drive home the point that the Fed can remain aggressive with raising rates.”

“Bitcoin is consolidating ahead of Jackson Hole but still remains comfortably above the $20,000 level.  The correlation with Bitcoin and equities is not holding up today, but that is mainly because the move higher in equities is a story about Chinese ADRs and not a broader move for tech stocks,” wrote the analyst, in a note seen by Benzinga.

Michaël van de Poppe said Bitcoin is “boring” currently but tomorrow it can “result in fake-outs.” The cryptocurrency trader said the apex coin was testing $21,800 and that it would lead to its acceleration to $23,200. The $21,000 level is crucial for the coin.

#Bitcoin is boring, as we anticipate reactions based on tomorrow’s news (PCE numbers and Powell’s speech).

Overall, on a support block now and;
– Tomorrow can result in fake-outs.

Trader Justin Bennett tweeted the correlation between the monetary base and risk assets on Friday. He said, “Don’t fight the Fed!”

Want a cheat sheet for #stocks and #crypto?

To reduce inflation, the Fed needs to lower that yellow line.

If the S&P drops, #Bitcoin follows.

Bitcoin’s adjusted Output Profit ratio — a ratio of spent outputs that have been in profit for a particular period of time — continues to face “heavy resistance” at the breakeven threshold of 1.0, tweeted Glassnode.

“This [suggests BTC] investors are taking profits during bear market rallies, and are spending coins at their cost-basis to simply ‘get their money back,’” said the on-chain analysis firm.

#Bitcoin aSOPR continues to face heavy resistance at the break-even threshold of 1.0.

This suggest $BTC investors are taking profits during bear market rallies, and are spending coins at their cost-basis to simply ‘get their money back’.

On the Ethereum side, the price of the second-largest coin is tightly correlated with the S&P500 amid global uncertainties, said Santiment.

“The supply of $ETH on exchanges rose sharply just prior to the drop last week, and network growth has fallen back to 3-month low levels,” tweeted the market intelligence platform.

#Ethereum‘s price continues following tightly with the #SP500 as global uncertainties continue. The supply of $ETH on exchanges rose sharply just prior to the drop last week, and network growth has fallen back to 3-month low levels. Our full analysis: https://t.co/70kbsMS1DQ pic.twitter.com/q8TvXdViqW

Read Next: Mark Cuban Super Bullish On Ethereum In Anticipation Of This Key Event