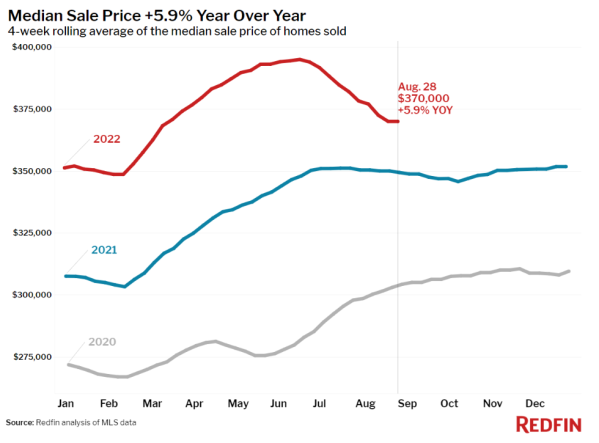 Stocks are up this morning as investors become more comfortable with risk assets after the jobs report. Bonds and MBS are down.

The upcoming week is relatively data-light, but we will have a lot of Fed-speak including Jerome Powell on Thursday. We won’t have any market-moving economic reports this week.

The housing market is “losing momentum” according to Wells Fargo. “There’s no question that the housing market has long lost momentum and continued to lose momentum in July,” Vitner told the Times in an article published Wednesday. “When we get the June, July, and August data, I think we’ll see substantially more weakness in the West, and probably more weakness across the country. It’s worse than it looks,” he added. “A lot of folks have underestimated how much of a shift we’ve seen in the housing market.”

The sale to list ratio fell below 100% for the first time since since March of 2021, as affordability constraints limit what buyers can pay. “While the cooldown appears to be tapering off, there are signs that there is more room for the market to ease,” said Redfin Chief Economist Daryl Fairweather. “The post-Labor Day slowdown will likely be a little more intense this year than in previous years when the market was super tight. Expect homes to linger on the market, which may lead to another small uptick in the share of sellers lowering their prices. Homebuyers’ budgets are increasingly stretched thin by rising rates and ongoing inflation, so sellers need to make their homes and their prices attractive to get buyers’ attention during this busy time of year.”

You can see that prices are beginning to moderate.

The service economy improved in August, according to the ISM Services Index. Most notably, we saw an improvement in supplier deliveries and a deceleration in prices. “The Prices Index decreased for the fourth consecutive month in August, down 0.8 percentage point to 71.5 percent. Despite an improvement in inventory levels, services businesses still continue to struggle to replenish their stocks, as the Inventories Index contracted for the third consecutive month; the reading of 46.2 percent is up 1.2 percentage points from July’s figure of 45 percent. The Inventory Sentiment Index (47.1 percent, down 3 percentage points from July’s reading of 50.1 percent) moved back into contraction territory in August.” We aren’t out of the woods by any stretch, but we are starting to see anecdotal indications that inflation is subsiding.