Morning Report: More hawkish comments out of the Fed. 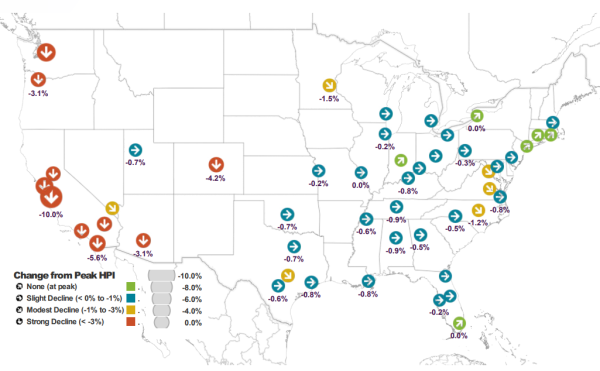 Stocks are lower after the European Central Bank raised rates by 75 basis points. Bonds and MBS are down small.

Jerome Powell is speaking this morning. The prepared remarks don’t seem to be on the Fed’s site yet.

We will need to move policy into a restrictive stance in order to put inflation on a sustained downward trajectory to 2 percent. That means that short-term interest rates adjusted for expected inflation, that is, real interest rates, will need to move into positive territory and remain there for some time. Right now, nominal short-term interest rates are lower than expected inflation, so short-term real interest rates are still negative and monetary policy is still accommodative. My current view is that it will be necessary to move the nominal fed funds rate up to somewhat above 4 percent by early next year and hold it there; I do not anticipate the Fed cutting the fed funds rate target next year. But let me emphasize that this is based on my current reading of the economy and outlook. While it is clear that the fed funds rate needs to move up from its current level, the size of rate increases at any particular FOMC meeting and the peak fed funds rate will depend on the inflation outlook, which depends on the assessment of how rapidly aggregate demand and supply are coming back into better balance and price pressures are being reduced.

Freedom just did another round of layoffs and it looks like they are pushing their ops largely overseas. The wholesale division took the brunt of the layoffs. The company has a contract with an offshoring company that has loans processed and underwritten in either India or the Philippines.

Home prices declined in July, according to Black Knight’s Mortgage Monitor. The median home price fell 0.77% in July, which was the worst single-month decline in prices since 2011. The declines should continue as housing affordability remains awful.

Black Knight thinks tappable equity probably peaked in May of this year. Note that prices generally follow a seasonal pattern, so some decline during the late summer / fall is normal.