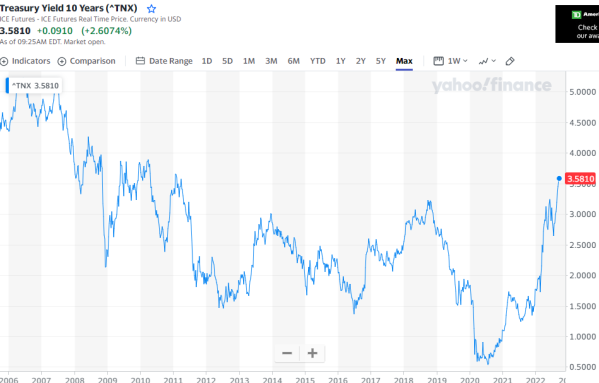 Stocks are lower as we begin the FOMC meeting. Bonds and MBS are down.

The 10 year bond yield has risen to an 11 year high. The rise over the past two years has been dramatic:

Housing starts unexpectedly increased in August to a seasonally-adjusted annual rate of 1.575 million. This was up 12.2% MOM and flat YOY. Building Permits declined 10% MOM and 14% YOY to 1.517 million. Housing completions fell 5.4% MOM to 1.342 million.

Overall, the decline in building permits supports the view that we are in a housing recession. Note that we are starting to get speculation that the Fed might start reducing rate hikes because housing has historically been a big part of of the economy. “Markets currently price-in an 80% chance of another 75 basis points hike in November, but we think 50bp is much more likely, and the parlous state of the housing market is a key factor in our forecast,” wrote Ian Shepherdson, chief economist at Pantheon Macroeconomics. “The longer and deeper the housing recession becomes, though, the greater the pressure it will exert on the Fed to dial back the pace of tightening.”

That said, housing (owners equivalent rent) is a big input into the inflation numbers, so the Fed would love to see home price appreciation slow. Median asking rents rose 14% YOY in July, according to Redfin. This is a deceleration from June and May. In fact, the monthly increase of 0.6% was the slowest since February.

The problem for renters is that there is still a shortage of housing units and rising rates are pushing would-be buyers into the rental market, which is pushing up rents.

“We provided third quarter guidance in our last earnings to reflect lower-than-normal transaction volume and home-price appreciation, as well as longer than normal hold times for our inventory associated with the most rapid change in residential real estate fundamentals in 40 years,” an Opendoor representative said in a statement. “We have moved quickly and decisively to prioritize inventory health and risk management.”

Given that Phoenix home price appreciation has been around 30%, it boggles the mind how it could lose money on these properties.