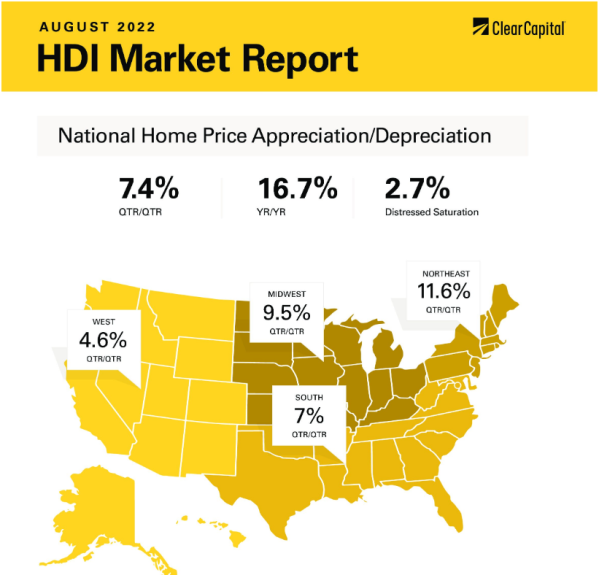 Stocks are higher this morning after the jobs report showed a deterioration in the labor market. Bonds and MBS are up.

The economy added 315,000 jobs in August, according to the BLS. This was a touch above the 293,000 consensus number, but a big decrease from the 526,000 that were reported in July. The unemployment rate ticked up 0.2% to 3.7%. The labor force participation rate increased to 61.4% from 61.1%, so this uptick in unemployment was driven by both an increase in the unemployed and an increase in the labor force. Average hourly earnings rose 5.1% YOY.

Overall, this report shows the Fed is finally getting some traction in slowing down the economy. Bonds took the report with a sigh of relief and stock have rallied as well.

It bears repeating that monetary policy acts with about a 6-9 month lag, so the big increases of the past couple of months have yet to impact the economy.

Home Prices rose 7.4% QOQ and 16.7% YOY according to the Clear Capital Home Data Index. The Northeast had the biggest quarterly growth at 11.6%. The Northeast and the Midwest have been laggards since the housing recovery began. The West looks like it is beginning to decelerate after torrid growth.

Note the Clear Capital index is about a month ahead of Case-Shiller and FHFA.

Construction spending fell 0.4% MOM and rose 8.4% YOY, according to Census. Residential construction fell 1.5% MOM and but is still up 14% YOY.

The median mortgage payment is approaching 150% of the typical rent payment, which is the biggest differential since 2009. In early 2020, the payments were roughly equal. This differential is a huge driver of the rent versus buy decision and is one of the reasons why purchase activity is slowing.

That said, it appears that home price appreciation is at least decelerating and the apartment REITs are all reporting mid-teens increases in rents for new tenants. So as rents rise and (hopefully) rates work back downwards that differential should close.

The combination of rising rates and rising prices have simply priced a lot of people out of the market.