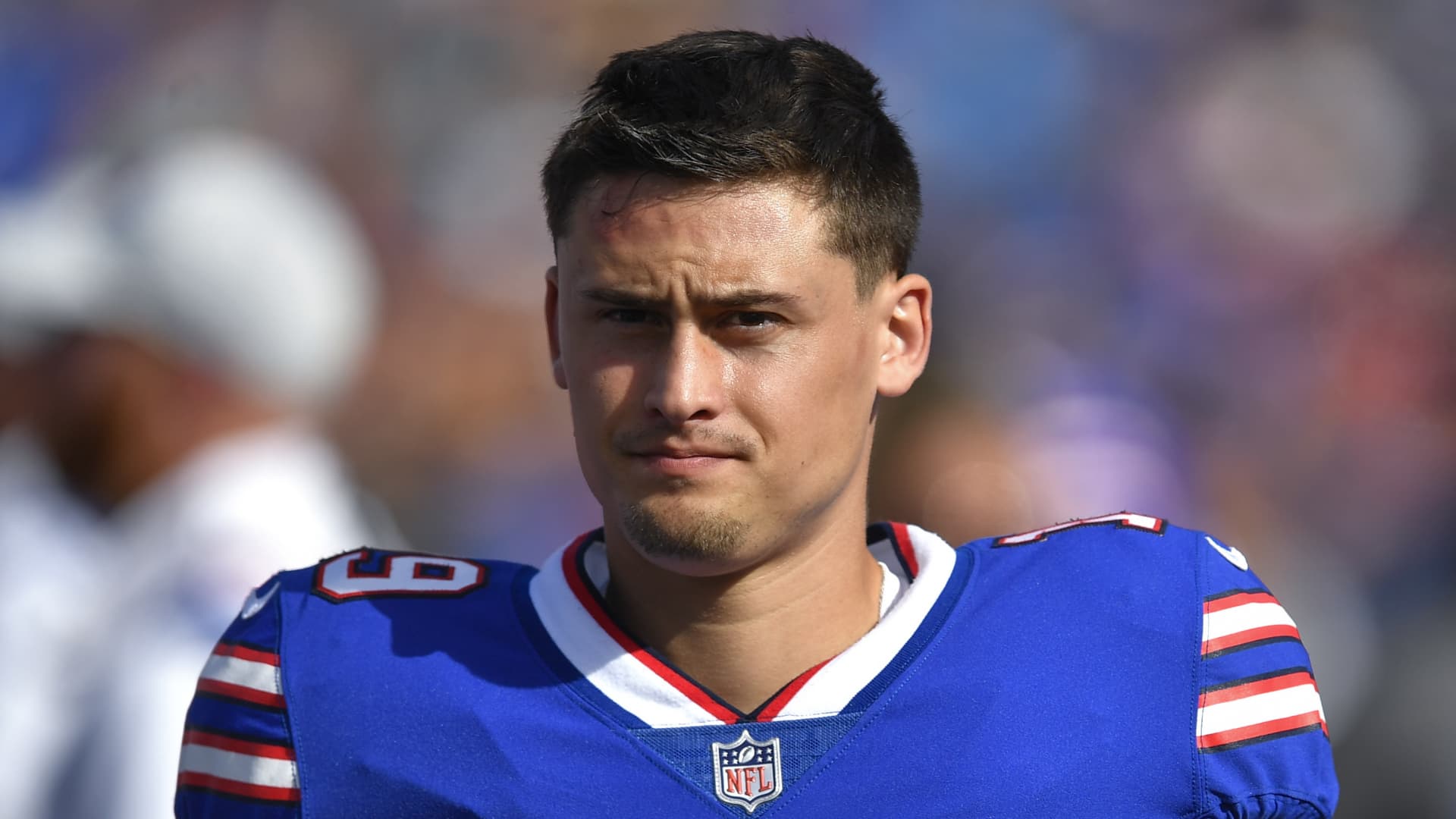 Buffalo Bills punter Matt Araiza walks on the sideline during the first half of a preseason NFL football game against the Indianapolis Colts in Orchard Park, N.Y., on Aug. 13, 2022. The Buffalo Bills cut Araiza from the team on Saturday, Aug. 27, two days after a lawsuit was filed alleging the player and two college teammates gang-raped a teenager last fall.

The Buffalo Bills on Saturday released punter Matt Araiza, one of the NFL’s rising stars, days after he was accused in a civil lawsuit of raping a teenager at a college party.

The move was announced by team general manager Brandon Beane and head coach Sean McDermott. Beane said Araiza needed to focus on the accusations, and that the behavior alleged would make the player “a no-go for us” if true.

The suit, filed Thursday, detailed the accuser’s narrative of meeting Ariaza at an off-campus Halloween party Oct. 17, 2021, when he played for San Diego State University.

Araiza denies the accusations of rape and other facets of the lawsuit.

“The facts of the incident are not what they are portrayed in the lawsuit or in the press,” he said in a statement shared Friday evening on Twitter by the NFL Network’s Ian Rapoport. “I look forward to quickly setting the record straight.”

The lawsuit filed in San Diego County court alleges Araiza, who was 21 at the time, gave a then-17-year-old girl an alcoholic beverage, asked for oral sex, and had sex with her in a side yard before taking her to a bedroom, where he and two other men are alleged to have gang-raped her.

She reported it to authorities the next day and underwent a rape examination, the suit said. The school said San Diego police requested it pause initiating its own Title IX investigation to allow detectives necessary leeway.

Early this month, the San Diego Police Department sent the results of its investigation, without making any arrests, to the local district attorney, which said the matter was still under review.

San Diego State said it wasn’t until July 22 that police said it was free to pursue its own investigation.

The Buffalo Bills, which fielded backup quarterback Matt Barkley in place of Araiza during Friday night’s preseason game against the Carolina Panthers, said the suit was a surprise.

Araiza was drafted in the sixth round and came to Buffalo as college football’s best punter last year.

Araiza’s lawyer, Kerry L. Armstrong, said by email Saturday night that Araiza is “very disappointed but is not upset with the Bills.”

“He is staying positive and knows he will eventually return to the NFL,” Armstrong said.

The team said in a statement Friday that it was recently made aware of a civil complaint involving Araiza.

Beane reiterated that at a news conference Saturday in which he announced Araiza was being released. He also said the team became aware of the accusations in late July.

“We tried to be thorough and thoughtful and not rush to judgment,” Beane said, adding that the information they had was limited.

He said a culture of following the law and good behavior is core to the Bills and that if the team knew about the accusations it would not have recruited Araiza.

“This is bigger than football,” Beane said.