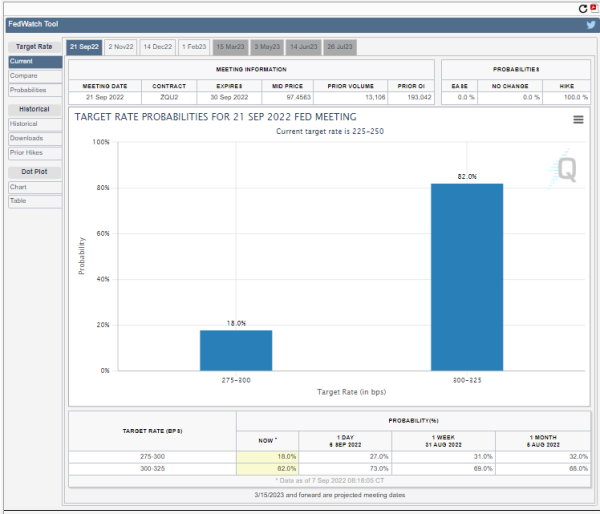 Stocks are flattish this morning on no real news. Bonds and MBS are up small.

The markets are forming a consensus that the Fed will hike rates another 75 basis points at the September 20 – 21 FOMC meeting. The Fed funds futures see a 82% chance of 75 and a 18% chance of 50.

Jerome Powell’s speech at Jackson Hole was taken as hawkish, and so far the Fed has not pushed back on that interpretation, which is partially what has driven the change in sentiment.

If the Fed does indeed hike by 75 basis points, this will work out to be 300 basis points of rate hikes over a six month period, which is the most dramatic increase in recent history. The most comparable period is 1994 when Alan Greenspan hiked the Fed Funds rate from 3.25% to 6% over the course of a year. Old-timers might remember that this crashed the mortgage backed securities market. Orange County, CA went bankrupt after massive MBS investments went sour.

We are doing more this time over the course of six months. If the December futures are correct, we will see 375 basis points over the course of a year. In 1981, Paul Volcker raised the Fed Funds rate from 16% to 20% and caused the deepest recession since the Great Depression.

The point is that the Fed is acting almost as aggressively against inflation as it did in the early 1980s. This certainly explains the stock market’s reaction.

Home prices declined 0.3% in July, according to CoreLogic. They rose 15.8% YOY. “Following June’s surge in mortgage rates and the resulting dampening effect on housing demand, price growth is taking a decisive turn. And even though annual price growth remains in double digits, the month-over-month decline suggests further deceleration on the horizon. The higher cost of homeownership has clearly eroded affordability, as inflation-adjusted monthly mortgage expenses are now even higher than they were at their former peak in 2006.”

Mortgage Applications fell 0.8% last week as purchases and refis fell by about the same amount. “Mortgage rates moved higher over the course of last week as markets continued to re-assess the prospects for the economy and the path of monetary policy, with expectations for short-term rates to move and stay higher for longer,” said Mike Fratantoni, MBA Senior Vice President and Chief Economist. “With the 30-year fixed rate rising to the highest level since mid-June, application volumes for both purchase and refinance loans dropped. Recent economic data will likely prevent any significant decline in mortgage rates in the near term, but the strong job market depicted in the August data should support housing demand. There is no sign of a rebound in purchase applications yet, but the robust job market and an increase in housing inventories should lead to an eventual increase in purchase activity.”