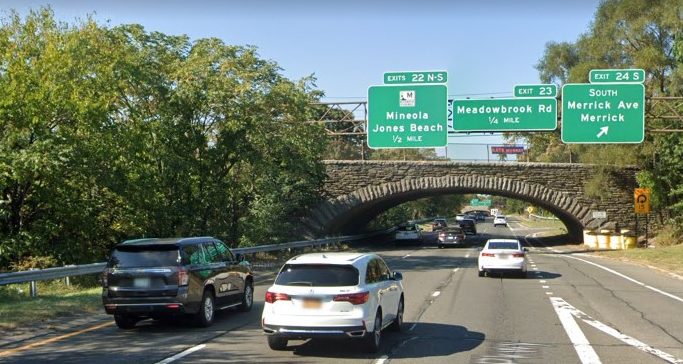 The Long Island Contractors Association and New York State Assemblywoman Michaelle Solages released a report Thursday on the use of public-private partnerships that could be employed to make safety improvements on the Southern State Parkway, including adding a special toll lane.

The parkway, particularly a 10-mile stretch between Exit 17 in Malverne and Exit 32 in Farmingdale that has earned the moniker “Blood Alley,” is in dire need of work to improve the safety of the roadway, according to the report produced by the American Road & Transportation Builders Association and commissioned by LICA.

The report says the hazardous conditions on the parkway, which contributed to 4,166 accidents on the 25.5-mile road in 2019, include sharp curves, short acceleration and deceleration ramps, the profusion of smaller exits, and the proximity of three major intersecting north-south highways. It suggests considering a high-occupancy toll (HOT) lane throughout the Southern State and rebuilding the roadway to today’s engineering safety specifications.

The use of a public-private partnership (P3) could help fund the parkway’s reconstruction with a funding stream supported through a HOT lane, the report says. Similar to a high-occupancy vehicle (HOV) lane like the one along the Long Island Expressway, a HOT lane includes tolling that may adjust pricing according to congestion levels, with the existing six-lanes remaining toll-free.

“As the study shows, New York, as well as many other states, have had successful P3’s that deal with major transportation needs. The Southern State Parkway should be next,” LICA Executive Marc Herbst said in a written statement. “Not only would potential improvements to the SSP save lives, but the work to improve conditions would create good jobs and improve traffic across Long Island. This is the sound kind of infrastructure investment we need.”

Despite some improvements, the design of the Southern State has been largely unchanged since the first section opened in 1927, when it was built to improve beach access for automobiles traveling 35 miles per hour.

Today, the parkway handles nearly 200,000 vehicles daily in Nassau County. Between 2012 and 2019, there were 15,768 accidents on the Southern State resulting in property damage, 8,443 resulting in injury, and 78 resulting in death, according to the New York State Department of Transportation.

Besides outlining the safety issues on the Southern State, the report also provides a market overview of public-private partnerships used on other U.S. highways and bridges. Among nine P3 projects profiled in the report, the average cost was $1.62 billion and the average length of construction was 4.4 years.

“I am proud to support the release of this study, especially because I believe the data presented will save lives,” Solages said in the statement. “The traffic crush that occurs on the Southern State Parkway simply cannot be left as is. We must act for families across Long Island. This report provides a future roadmap to successful change.”