Irish GDP is growing steadily. But a cost of living crisis still looms 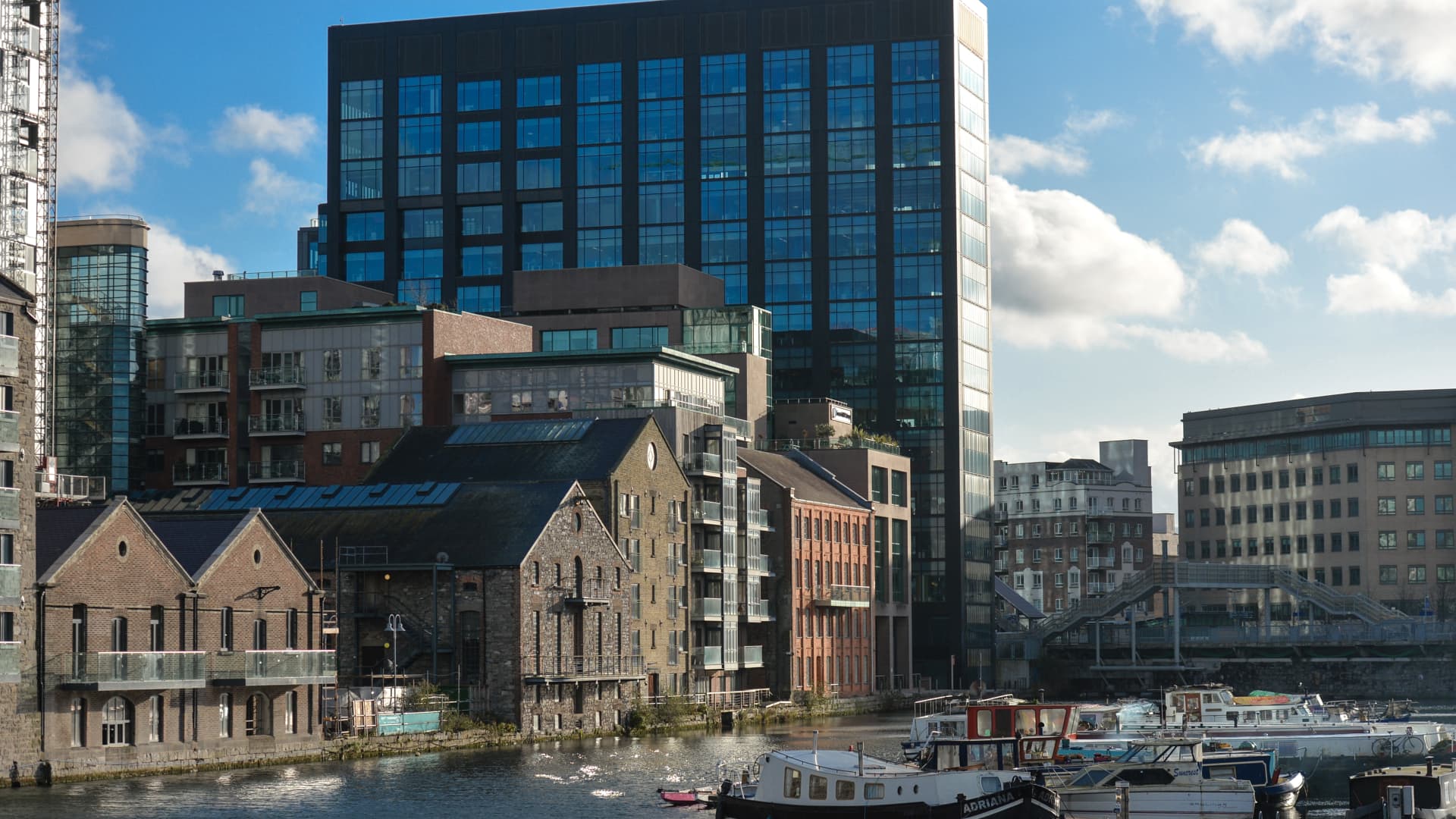 A view of the Google EMEA HQ building in the western part of the Grand Canal Docks in Dublin, seen during Level 5 Covid-19 lockdown. On Friday, 22 January, 2021, in Dublin, Ireland.

Ireland’s economic growth continued to outpace the euro zone average in the second quarter — but the country is still grappling with the same cost of living and energy security pressures as its neighbours.

Government figures show Irish gross domestic product increased by 1.8% quarter-on-quarter, driven by higher consumer and business spending, although it was down markedly from the 6.3% growth posted in the first quarter.

Gross national product — which strips out profit from the many multinational companies which are based in the country, and account for 54.8% of its economy — grew 2.1%.

In comparison, the euro zone economy as a whole grew by just 0.8% in the second quarter compared with the previous three months.

A fall in euro area business activity has some analysts, including at the Royal Bank of Canada and ING, arguing the bloc is likely to enter a recession sooner than previously thought. The U.K. economy, meanwhile, contracted 0.1% on the quarter amid similar recession warnings.

And there are fears Ireland’s growth may not remain so robust.

“A number of indicators suggest that momentum has eased in the third quarter, while the outlook over the coming quarters has weakened considerably,” Irish Finance minister Paschal Donohoe said in a statement Friday.

Ireland is facing the same pressures as its neighbours over the cost of living and energy security.

A flash estimate published by the European Union’s statistics agency put Irish inflation at 8.9% in August, just below the euro zone average of 9.1%.

And things are likely to get worse, according to Conall Mac Coille, chief economist at Irish financial consultancy Davy, given rising household energy bills in winter. Utility firm Electric Ireland has announced that residential electricity bills will be 26.7% higher and gas bills 36.5% higher from Oct. 1.

Gerard Brady, head of national policy and chief economist at Irish business lobbying group Ibec, told CNBC there is “no doubt” businesses are starting to feel the strain as prices rise in energy, commodities and transport.

“That’s putting a lot of pressure on operating margins. It’s in every sector as well, it’s a broad economic shock,” he told CNBC by phone.

“Consumers will really feel the hit when winter arrives, but businesses are already seeing bills three to five times higher, so for energy-intensive industries it’s a huge challenge.”

Its director, Conor Mulvihill, told CNBC that many businesses have increased their revenues over the last year, but this has been “absolutely obliterated” by higher costs in the likes of animal feed, fertiliser, diesel, and energy in particular.

A tight labor market, with Irish employment at a record high of 73.5%, also means it has been a challenge for firms to recruit and keep workers, Mulvihill said.

With its close links to the European energy market — and particularly the U.K.’s, from which it imports around 75% of its gas — Ireland faces similar worries about the potential for shortages this winter. Energy firm National Grid, which controls U.K. supply lines, says Ireland will not be cut off — but blackouts in both countries remain a possibility.

As plans to weather the winter cost-of-living storm emerge from different European governments, Ireland is due to announce energy bill grants and other support measures totalling 6.7 billion euros in its 2023 budget on Sept. 27.

The country’s current economic health does give it additional leeway. Figures released in August showed state finances emerged from a Covid-era deficit into a surplus of 6 billion euros.

Multinationals in the country, many of which have been attracted by its low 12.5% corporate tax rate, include technology giants such as Alphabet, Meta, Intel and Amazon; and pharma firms like Pfizer and Johnson & Johnson.

The higher profits made by these companies during the pandemic helped power a 30% year-on-year rise in corporate tax last year, totalling 15.3 billion euros — roughly the same as it collected in value added tax.

The dominance of a cluster of corporations does leave Ireland vulnerable to sector-wide slowdowns, Davy’s Mac Coille noted.

A coming rise in the corporate tax rate to 15% has also led to questions over whether the relatively small economy can maintain its attractiveness to big firms.

On the consumer spending side, the current upwards trajectory also looks fragile, with a consumer sentiment index from KBC Bank falling in August to a late-2020 low.

And for many, fresh economic challenges play out in front of a longstanding and worsening housing shortage.

Asking prices on houses are up 11% year-on-year, according to property website Myhome.ie, while rental prices rose to an all-time high in August after rising 12.6%, figures published by Daft.ie showed.

Rachel, a 27-year-old HR worker from Kildare who is currently flat hunting in Dublin, says she has been shocked by how much worse the situation is since she moved to the capital four years ago.

“I’m checking property sites on my phone constantly and by the time I’ve clicked the link, the ad has been taken down,” she told CNBC. The quality of what you can get for the same money has deteriorated, she said, and she and her friends are feeling pressure from higher bills.

“For renters, and definitely for people most in need — in energy poverty, on pensions — there is a real anxiety around what the winter holds. People are afraid of the unknown and are definitely looking to the budget,” she said.